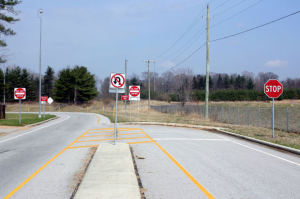 Though it may seem a very ordinary occurrence during driving, executing a U-turn may be one of the most dangerous driving maneuvers, and a common cause of collisions.  The reasons for this are that when executing a U-turn, the driver must be aware of oncoming traffic, traffic that may be making a right turn at an opposite corner, as well as the traffic behind him or her.  This is a lot to be aware of.  Also, a U-turn takes longer to complete than a standard turn, so a longer break in traffic is required in order for the U-turn to be completed safely.

When a collision occurs involving a U-turn, the circumstances surrounding the maneuver will determine liability. For example, a driver making a U-turn from the wrong lane, or a turn lane designated as “no U-Turn” would likely be found liable if such a move resulted in a collision.  A common scenario is when a driver pulls to the side of the road and, after presumably waiting for traffic to clear, executes a U-turn across lanes to go in the opposite direction.  This move is dangerous, as visibility can be impaired, and can result in a T-bone type collision, which often result in more severe injuries.

END_OF_DOCUMENT_TOKEN_TO_BE_REPLACED

The short answer to the title question is yes, they can be.  There are several reasons for this, the first of which is obvious: that you are entering an intersection against oncoming traffic.  May left-hand turn lanes in California – especially within urban areas – are not controlled by a left turn traffic signal, which leaves the driver responsible to wait for appropriate clearing in oncoming traffic in order to safely execute his or her left turn.  It can be easy to misjudge speed and the distance at which an oncoming vehicle is approaching, especially at night or in other low visibility conditions.

Additionally, collisions that take place during execution of a left turn within an intersection often involve side impact.  Because the doors are not usually reinforced, they are one of the weakest areas of the vehicle’s structure which can result in passenger compartment intrusion during a side impact collision, and greater injuries.