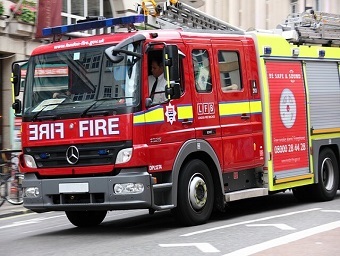 Vehicle Fire Involved in a Crash Along I-5 in Sacramento

I’m Ed Smith, a Sacramento car accident lawyer. A single-vehicle crash along southbound Interstate 5 just north of Interstate 80 on May 29 resulted in a vehicle catching on fire and injuries to the driver. According to the California Highway Patrol (CHP), a passerby had noticed the burning vehicle and pulled over to the side, taking the driver from the car and harm’s way.

The collision occurred shortly after 7:00 p.m. when a red SUV struck an unidentified object, overturned and landed on its wheels. A passerby removed the male driver from his vehicle before the arrival of emergency medical personnel, which the CHP requested along with a wrecker to tow away the car. It is unknown at the time of this report what caused the car accident. No word has been given as to the extent of injury.

According to the National Fire Protection Association, roughly 20 percent of all fires each year are vehicle fires. In all, the NFPA reports that about 287,000 vehicle fires occur each year, causing approximately 1,500 deaths. The cost of such fires amounts to $1.3 billion annually. Of the highway fire deaths, about 92 percent were in vehicles designed for use on high-speed roads such as trucks, cars, RVs, and motorcycles. The primary reason for vehicle fires is equipment failure.

Car fires are often due to events that precede the actual blaze. These can be human error, defective parts, mechanical and chemical reasons. Let’s look at the top reasons vehicle fires happen:

What to Do If Your Car Catches Fire

With a car fire, it is crucial to vacate the vehicle at the first hint of a fire. However, this is not always possible. A driver can be trapped in the car, or he or she can suffer injuries that prevent leaving the vehicle quickly. Often, the fire erupts without much warning so that the car occupants are not aware of the danger until it is too late.

Burns can be devastating, painful and require surgery or cause the person to succumb to his or her injuries. There are three types of burns, identified by the degree of damage:

I’m Ed Smith, a Sacramento car accident lawyer. Single-vehicle accidents can result in devastating injuries that can be compounded when the car catches on fire. If you or someone you care about was injured due to negligence, I would like to offer you my free and friendly advice. Please give me a call at (916) 921-6400 in the Sacramento area, or if you are outside the city, call (800) 404-5400.

Former clients have posted reviews of my legal practice at the following sites:

By visiting Verdicts and Settlements on my website, you can look over some of our prior cases and how they concluded.

Trial attorneys who have garnered verdicts over $1 million for past clients are eligible to join milliondollaradvocates.com. I am a California forum member.