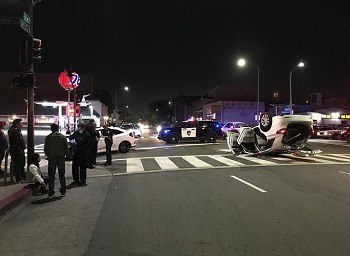 The accident occurred in the evening near Bainbridge Drive and Watt Avenue. According to a representative of the California Highway Patrol (CHP) in North Sacramento, it appeared that two vehicles were racing when the crash occurred. It is unknown at what speeds the vehicles were traveling or whether alcohol was involved when the accident happened.

Officers with the CHP reported that upon arrival, it was discovered that one driver, behind the wheel of a Ford Mustang, age 30, had struck a fence, then a pole, resulting in a rollover accident. The driver was then thrown from the car. He was pronounced dead at the accident scene. Two persons in the other vehicle, identified as a Chevy Camaro, were also injured. Both were taken to a hospital with injuries described as minor.

Street racing is a dangerous, illegal pastime and has been a part of the United States auto culture for many years. However, it not only endangers the participants, it endangers innocent bystanders. While vehicles operated by street racers may be customized to increase speed, they are not equipped with safety features such as roll bars. The residents of Sacramento County are no strangers to street racing. In November, two persons died, including an innocent motorist, when a street racer on Highway 50 lost control and struck another vehicle, killing a passenger in the car.

The Dangers of Speeding

According to the Governors Highway Safety Association, in 2016, 10,111 individuals died in crashes that were deemed speed-related. This represents 27 percent of the fatalities in motor vehicle accidents. Speeding is dangerous for the following reasons:

In rollover accidents, not wearing a seat belt increases the risk of dying. Nationwide, seat belt use for occupants of the front seat is at 90.1 percent. Out of all fatalities, 52 percent of drivers who died did not wear a seat belt. Fifty-six percent of fatally injured front-seat occupants did not use restraints. The rate of seat belt use has increased, most likely due to law enforcement efforts.

I’m Ed Smith, a North Highlands car accident lawyer. Street racing can cause serious injuries to others. If you or a loved one has been hurt, please call me at (916) 921-6400 for legal advice, which is free and friendly. Outside the area, call (800) 404-5400 or use our online contact form, provided for your convenience.

Reviews on my law practice are found at:

On the page titled verdicts and settlements, you can look over a list of some of my cases and their positive resolutions for clients.

As a Million Dollar Advocates member, I belong to a group of trial attorneys who have demonstrated client settlements or verdicts of $1 million or over.

As an injury lawyer for over 35 years in North Highlands and Northern California, it has been my honor to have recovered fair compensation for many victims of catastrophic injuries or in wrongful death cases.