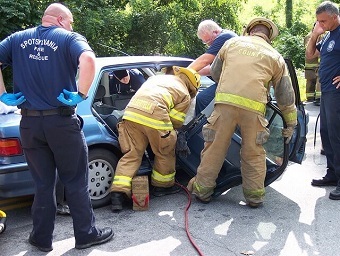 I’m Ed Smith, a car accident attorney in Sacramento. An early March crash between an SUV and tanker truck resulted in the death of the SUV driver.

I want to extend my sympathy to the family and friends of the driver who died in their time of sorrow.

According to reports, the accident occurred along Interstate 5 where it passes J Street in the historic district when the driver of a Toyota Highlander, reportedly speeding, attempted to make a lane change. The Toyota then struck a tanker truck in the rear that was heading in the same direction. The Toyota driver died as a result of the crash. No information has been released on the driver’s identity, pending notification of relatives. Neither is information available on whether the driver of the tanker was injured in the collision.

Why Speeding Increases the Risk of a Crash

Speeding not only involves going over the speed limit but driving too fast for weather conditions. The faster a vehicle moves, the further the distance a vehicle travels before the driver reacts to roadway issues and the longer the distance it takes to stop that vehicle in an emergency. The impact of the vehicle is also increased when it strikes another vehicle or stationary object at higher speeds. Recommendations by the National Transportation Safety Board suggest increasing the penalties for speeding to match those of drunk drivers. Other recommendations included increased use of cameras and increased enforcement of speed limits. According to the National Highway Traffic Safety Administration, speeding contributed to 10,111 traffic fatalities in 2016, an increase of 4 percent over the previous year.

Trucks such as the tanker in the above accident are allowed to weigh up to 80,000 pounds and are considerably larger than the motor vehicles that share the road. An accident with a big truck frequently results in major injuries or fatalities. In addition, hitting a truck on the side or rear can cause shearing injury to the motor vehicle driver due to underride accidents. In such accidents, the smaller vehicle slips under the truck, shearing off the top and causing significant injuries and death.

Of the 1,475 car and pickup occupants who died in the year 2016 from collisions with trucks, 915 individuals died in front collisions, 295 died in side collisions with the larger vehicles and 238 were killed when their car hit the truck in the rear. The Stop Underrides Act of 2017, which has yet to become law, would make side and front underride guards mandatory. In addition, it would dictate that rear guards are made stronger. The NHTSA urged that trucks be outfitted with upgraded rear guards in 2015  but as yet has not specified regulatory plans to accomplish this. Opposition to side guards has been stated by the Truck Trailer Manufacturers Association as saying that such guards would make the trucks heavier, weakening the trailers. The association says the side guards would not be cost effective. An organization for smaller truckers is reviewing the act and has yet to provide a statement. The American Trucking Association is waiting to see the NHTSA’s findings on side underguards.

I’m Ed Smith, a car accident attorney in Sacramento. When someone you love is killed in a truck accident or you are injured, an injury lawyer can provide the insight you need to deal with the financial issues the accident caused. Reach out to me at (916) 921-6400 in the Sacramento area or (800) 404-5400 nationwide to receive friendly advice that is free of charge. You can contact me online, and use our convenient contact form.

In 35 years of practice, I have helped Sacramento residents and others in Northern California get on their feet after an accident. These include catastrophic injuries such as traumatic brain injury, amputation and wrongful death.

You can see how I resolved prior cases and what clients thought of my practice at:

I have won case verdicts and negotiated settlements exceeding $1 million for clients. Because of this, I was invited to join the Million Dollar Advocates, a nationwide trial lawyers forum.

Read more about personal injury law topics here on AutoAccident.com, a website I founded and own.