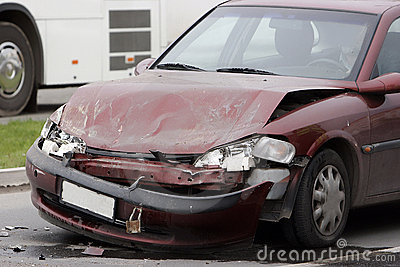 I’m Ed Smith, a personal injury attorney in Rancho Cordova. Rancho Cordova firefighters were startled by the sound of a loud impact on the evening of March 1, 2016. Especially, since it happened just outside of their fire station located at 12399 Folsom Boulevard in Rancho Cordova.

Shortly before 11:00 p.m., a car travelling westbound on Folsom Boulevard smashed its way through a chain-link fence. The fence separated the Sacramento Metro Fire District’s Station No. 63 from its neighboring Chevron gas station. The car then plowed into Station 63’s main entrance gate. The gate was bent by the impact and forced into an open position.

Fire personnel heard the impact sounds from within the fire house. They ran outside to see what was going on and to help. The driver of the suspect vehicle through the car into reverse and backed out of the driveway erratically. The erratic motorist then hit a telephone pole, drove across landscaping and proceeded down Folsom Boulevard. We have learned that the person driving the car erratically was not hurt.

Rancho Cordova Police Department officers found the car a while later. Officers towed the vehicle away and ticketed the driver.

Why Did the Driver Leave the Crash Scene?

Officials did not indicate why the driver left the scene. There are a number of possible reasons a driver may fail to stop at a crash scene. It might be fear, driving under the influence, or lack of car insurance. If a party to a crash fails to stop it is called a hit and run.

Hit and run incidents may vary from bodily injury, property damage and sometimes death. Failing to stop after being involved in an automobile crash is a crime.

I’m Ed Smith, a Rancho Cordova Personal Injury Lawyer. If you have been involved in an accident, please call me at 916-921-6400 for free, friendly advice.

View customer ratings for me and my staff on: Yelp, Avvo and Google.

View my proven track record of success:  Past Verdicts and settlements.