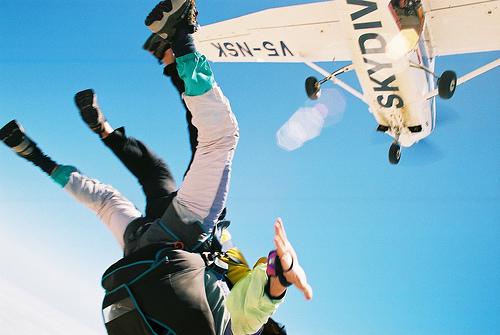 A first-time skydiver was embarking on an adventure through the skies. Unfortunately, the skydiver and his instructor faced a malfunction in the parachute deployment. This defect caused the divers to lose their lives too soon on Saturday, August 6, 2016.

An instructor at the Parachute Center in Acampo was accompanying a new skydiving student. The instructor was 25-year-old Yong Kwon from South Korea. The new jumper was identified as 18-year-old Tyler Turner from Los Banos. The two skydivers jumped off the airplane at 13,000 feet and initiated their adventure through the skies. Not long after, the pair faced an unexpected emergency when the main and emergency parachutes failed to deploy. The backup parachute was tangled with the smaller parachute which caused it to fail to deploy.

What Caused the Defect?

It is still unknown what caused the smaller parachute, the drogue, for the main parachute to not open. However, both the backup and main parachutes were packed correctly. The media has reported at least 17 individuals may have passed away at the Parachute Center since 1981.

A recent bulletin from investigators of the Federal Aviation Administration reveals that the tragedy was created by other factors as well. According to the United States Parachute Association, the skydiver instructor, Yong Kwon, did not possess proper certification for sky diving instruction. The association suspended the license of the instructor that trained Kwon. Due to Kwon’s lack of proper credentials and training, this led to the association to investigate and inform 140 instructors worldwide to update their credentials for training. The association is also investigating the Parachute Center apart from the Federal Aviation Administration investigation.

I’m Ed Smith, a Lodi Personal Injury Lawyer and creator of the leading personal injury website in California. If you or someone you love has been injured in an accident precipitated by a negligent party and need an experienced injury lawyer, please contact me at (209) 227-1931 for free and friendly advice. You can also call me anytime on my toll-free telephone number at (800) 404-5400 for fast, free, and friendly advice.

I have helped Northern California families with their wrongful death and personal injury claims for over 3 decades.

Read our reviews written by our satisfied clients on Avvo (the website for lawyer ratings), Yelp, and Google.

The Edward A Smith Law Offices is a member of the California section of Million Dollar Advocates Forum.

Review my successful Past Verdicts and Settlements here.