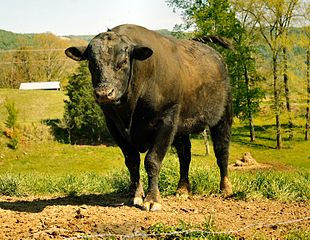 Motorcyclist Killed in Collision with Bull

I’m Ed Smith, an Anderson Motorcycle Accident Lawyer. A woman was killed while riding her motorcycle recently after colliding with an animal.

29-year-old Kristin Anna Wise from Palo Cedro was riding her 2004 Suzuki motorcycle south on Deschutes Road. This stretch of roadway connects Palo Cedro to the City of Anderson. It passes through farms, orchards, and residential subdivisions. Headed toward Anderson, Kristin Wise was riding along Jade Lane at Balls Ferry Road  at around 1:00 a.m. when she came across a large black bull in the roadway just ahead. She was unable to avoid the large animal that can weigh up to 2,400 pounds and collided with the bull.

The collision was a direct impact to the front of the bike. Photographs of the motorcycle accident show the front headlight area and handlebars completely caved in backward toward the rider. Kristin Wise perished at the scene of the incident and the bull walked into an adjacent field suffering some injuries. The California Highway Patrol stopped all traffic on the road as they worked to investigate the wreckage and clean up the debris.

An employee of a nearby gas station was surprised upon hearing news of the accident. The attendant stated that the area is not open range for cattle or other livestock so you rarely see them on the roads. The owner of the bull has not been located and is sought out by authorities.

We extend our condolences to the family members and friends of Ms. Wise during this difficult time of loss.

Farming and ranching are big industries in California, even with the rapidly increasing population and land development. This increase of roads and people in rural areas only raises the chances of collisions with livestock. California laws require owners to take the proper measures to ensure that their animals do not interfere with traffic on roads and highways. Fencing, containment, and adequate land are things that need to be secure in order to prevent livestock from escaping onto highways.

Despite these laws, it is not always the fault of the rancher or owner if an animal escapes and ends up in an accident with a vehicle on a roadway. Each case is different and many varying factors are considered. It is important to have a good lawyer to represent you who knows what to look for and has many resources to help determine negligence or fault in a situation like this.

I’m Ed Smith, an Anderson Motorcycle Accident Lawyer. If you or a loved one have been involved in an accident, especially with livestock, call me right away at 530-392-9400 or 800-404-5400 for free and friendly advice. I have been working as a lawyer in the Northern California area, including Anderson, for 35 years. My team and I have successfully represented many clients with wrongful death and livestock collision cases.

Look at my past verdicts and settlements page to see how I have helped others with motorcycle, personal injury, wrongful death, and all kinds of other legal issues.

My website, AutoAccident.com also has many articles and pages with news and legal advice being added daily.

I am listed on the MillionDollarAdvocates.com which names firms and trial lawyers in the United States that have won million dollar verdicts or settlements.