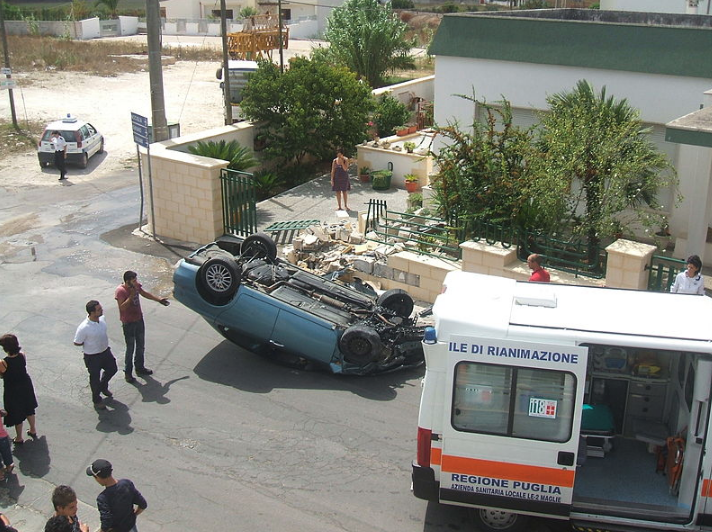 On Friday, October 20, 2017, two individuals suffered injuries after being involved in a rollover crash that authorities say may have been related to speeding.

According to Sgt. Sam Rowland of the Fairfield Police Department (FPD), the accident occurred at around 2:30 p.m. on the 2100 block of Courage Drive. Rowland reported that the driver of a red-colored four-door sedan had been driving east on Courage Drive at an unsafe rate of speed when he came to a right-hand curve in the roadway. Upon failing to maneuver within the curve, the red sedan drifted into an adjacent lane of traffic and collided with a black-colored sports utility vehicle that had also been driving along east on Courage Drive.

The impact of the collision caused both vehicles to exit the roadway onto the raised section of the center median. The vehicles collided with two large trees planted in the median and uprooted them before the sedan finally came to a stop at the top of the median. The SUV traveled through the median before overturning and coming to a stop on its roof in the westbound section of Courage Drive.

After receiving calls indicating that multiple individuals had been injured during the collision, FPD sent emergency responders to the crash site. Upon arrival, responders discovered that the drivers of both vehicles had sustained traumatic injuries. Both individuals were transported by medical ambulance to a nearby hospital for treatment.

Medical officials reported that neither of the drivers suffered severe injuries and were expected to fully recover. Additionally, no other people or vehicles were involved in the collision.

Investigating officers have reported that there was no evidence of driving under the influence found at the accident site and neither of the drivers is suspected to have been intoxicated. Rowland told reporters that there were no kids or passenger involved, that the drivers weren’t racing each other, and that neither driver knew each other.

An investigation into what factors may have caused the accident is ongoing.

According to local reports, the incident blocked traffic while first responders attended to the injured drivers and police officers investigated the accident scene. Eastbound traffic was completely blocked until work crews were able to clear the wreckage from the roadway. Traffic congestion continued in the area for some time after the accident.

I’m Ed Smith, a Fairfield personal injury lawyer. Have you or someone you love been injured in an accident caused by the negligence of another party? Please contact me right away at (707) 564-1900 or (800) 404-5400 for free, friendly, and no-obligation advice. I can also be reached online at www.AutoAccident.com.

Since 1982, I’ve helped Fairfield families and individuals with personal injury and wrongful death cases receive the full repayments they are owed.

Visit Avvo, Google, and Yelp to read reviews from my past clients.

I’m in the Million Dollar Advocates Forum, a group of U.S. attorneys who’ve obtained verdicts or settlements that were worth over $1,000,000.

See our Past Settlements and Verdicts here.

AutoAccident.com is the leading Northern California website for info on personal injury and auto collisions.