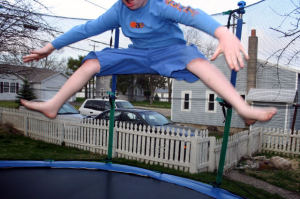 Backyard trampolines are very common here in Sacramento due to our year-round mild weather; and bouncing has been a great way for kids to burn off their excess energy for generations, however trampolines can be quite dangerous.  Dangers include falling from the trampoline, or landing incorrectly within it, which can result in significant head, neck or back injuries.  Every year, almost 100,000 emergency room visits are attributed to injuries sustained while using trampolines.  Most of those injuries – upwards of 80% – occur in children under 15 years of age.

Insurance companies have begun treating backyard trampolines like swimming pools, which are known as “attractive nuisances” because they can draw young people and have inherent dangers.  Many insurers requires that your yard be fenced if you own a trampoline, and otherwise will not cover any losses that occur with its use.  In fact, some homeowners’ policies may exclude the use of trampolines altogether or ownership of one could result in higher premiums.

To illustrate just how easy it is to get hurt on a trampoline, we found the following video (don’t worry – nothing too serious!):

The following are several safety tips for trampoline use:

Similar to trampolines, inflatable “bounce houses”, which are very popular and available for rent for birthday parties, fairs and festivals, also have been in the media due to an increase in injuries related to their use.  A study in the December 2012 issue of Pediatrics states that upwards of 30 children a day were treated for injuries related to bounce house usage in 2010.  Many bounce house injuries occur because there are several children inside the structure bouncing at one time, and they invariably collide with each other.  Another common mechanism of injury is when the bounce house structure is blown over by wind or collapses due to the weight of the occupants.
As will trampolines, the most common form of injuries were sprain/strains, fractures and head/neck injuries.

Find out more about our office by checking out our reviews on Yelp and Avvo.