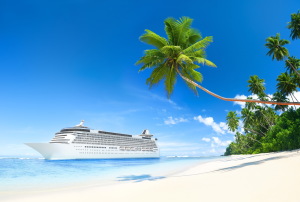 Cruise ships have  been plagued with numerous safety issues.  In December 2014, Oceania cruises had 656 guests aboard a luxury cruise liner and was docked at the St. Lucia port when a fire broke out ultimately resulting in the death of three people.  Fortunately, the fire was contained in the engine room but sadly it claimed the lives of two contractors and one crew member before it was extinguished.  The investigation into the cause of this fire revealed that three bolts holding the fuel line supply flange that connects to the engine had loosened completely.  The remaining fourth bolt on the fuel line was fractured.  Ultimately, when the bolts failed the fuel oil sprayed out and ignited when it came into contact with the turbocharger components and/or the engine’s exhaust piping.

This is not the only recent instance of a fire on a cruise ship. Fires on cruise ships have become increasingly common.

In May 2013, a Royal Carribean cruise liner experienced a severe fire that took nearly four decks of the boat.  The boat had was headed to Bahamas, CocoCay when the blaze occurred. The fire occurred while in transit and workers were able to contain the blaze while the ship continued to cruise to port in Bahamas requiring the 2,224 passengers sleep on the deck.

A Carnival Cruise ship also experienced a fire in February 2013 when the ship’s engine room lit up with flames. For safety sake, the power was cut  and the boat ran on generator power. However, without power, the toilets were out of order causing sewage to leak from the passenger rooms into the hallways and floors.  The ship had experienced mechanical problems in the past prior to this fire.

The amount of lives on a booked cruise liner easily can be upwards of 1,000 people.  In the case of the Oceania cruise ship besides the 656 guests the boat also included approximately 400 workers.   The Royal Carribean cruise ship that caught fire had 796 crew members caring for 2,224 guests.  The Carnival cruise ship had 1,086 crew members and 3,100 passengers.  These cruise ships become ‘floating cities.’

Due to the increase of fires on cruise ships, the US Coast Guard in March 2015, issued a marine safety alert.  The alert issued  by the US Coast Guard included a reminder to conduct engineering watches and thoroughly maintain machinery to hopefully reduce the number of fires aboard ships in 2015.

These ‘floating cities’ holding thousands of lives should be held to a high standard of safety to protect the lives of both crew members and passengers.

If you  have been injured on a cruise due to negligence or intentional conduct, please call me anytime for free, friendly advice. I work with experienced Maritime lawyers in every port city.  We will ensure that every step is taken to aid your recovery for medical expenses, lost wages and pain and suffering.  My telephone number is 916-921-6400 in Sacramento, California. Or you can contact me here.

I encourage people to learn more about my firm by reading of the experiences other have had with my office on Yelp, AVVO or Google.