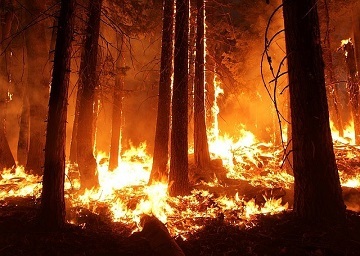 Californians are once again facing devastation and loss of life as a result of a massive and unpredictable fire. This fire has been referred to as the Carr Fire, and it has quickly destroyed the area around Redding. Wildfires are a common threat in California and last year was one of the worst cases in the state’s history. Let’s look at the timeline of the Carr Fire and the destruction it has already caused.  We’ll take a look at the loss of life and the damage of homes and businesses. Before we start, let me offer my hope that you and your family are safe as you are reading this. For the families who have lost a loved one, my prayers are with you in this time of extraordinary grief. I also want to mention my admiration for the brave firefighters that risk their own lives to save others.

Carr Fire: A Place in History

The Carr Fire is the largest in California so far in 2018. Currently, it is sixth in the lineup of all California fires. The 2017 Tubbs Fire is listed as the most destructive wildfire. However, as of this report, the Carr Fire has already burned 67,000 acres more than the Tubbs Fire. According to Cal Fire, on August 1 at 7:00 a.m., the fire was 35 percent contained.

The Start of the Carr Fire

The Carr Fire started on Monday, July 23, in the area around Whiskeytown Lake in Shasta County, which is eight miles west of the town of Redding. The lake, a well-known recreation area, was forced to close due to fire damage. The initial fire area was near Carr Powerhouse Road along Highway 299. It is thought at this time that the fire was due to sparks falling to the ground and igniting the blaze from a vehicle experiencing mechanical failure. Due to the lack of rain, high heat and winds, the flames spread quickly.

On Thursday, July 26, Melody Bledsoe, 70, and her two great-grandchildren, James, 5, and Emily, 4, were killed in their home. A bulldozer operator who was retained to fight the fire was identified as Don Smith, 81, who also died on Thursday.

Authorities have said that an investigation into his death is underway at this time. Redding Fire Inspector Jeremy Stoke died on the night of July 26, while he was fighting the fire. According to reports, the flames consumed the area he was working in, and crews nearby said his radio went dead. His remains were found close to the location. One other individual also died, however, the person’s identity has not yet been released.

Three Marin County firefighters were treated at Mercy Medical Center. They suffered from burn injuries to their faces, necks, and ears. A fast-moving heat blast caused their wounds as they were in the position to defend structures in the area. Two of the firefighters were released while a third, who suffered a serious injury, was taken to UC Davis burn center for treatment. The center also evaluated five civilians who were injured. A representative from the center said the injuries were not serious. Four people who were reported missing have all been found, according to the police.

As of 7 a.m. on August 1, the following damages have been reported:

As of July 31, 27,000 people remain out of their homes. However, 10,000 who had previously been evacuated were allowed to return. Evacuations started shortly after the fire left the foothills around the city on Thursday, August 26, and encroached on western Redding. Authorities used reverse 911 calls, social media, and public announcements to get the word out to residents.

While efforts were made to reach inhabitants of homes in the path of the blaze, not all residents received the news. In Shasta Lake, for example, few residents other than those in the Summit City community got the message. Ed Blescoe, 76, the husband of Melody, who died, said he never was told to evacuate in his neighborhood along Quartz Hill Road. He was contacted by his wife as the rapidly moving fire approached their home while he was shopping for food. He tried, he said, to return, but he was unable to save the children or their great-grandmother as the fire consumed the neighborhood.

A Shasta County undersheriff said that the area was saturated by police going door-to-door telling residents to leave. They were using flags to mark those homes where residents were alerted and those who did not respond to a knock on their door. Due to the ferocity of the fire, there was no way to see if flags were left in front of the Blescoe residence.

While the fire started on July 23, it wasn’t until July 26 that it exploded. Initially, it moved through the towns of Shasta and Keswick. After it moved over the Sacramento River, it encroached on the western part of Redding where it destroyed several subdivisions. By the 28th, the fire was moving in a southwesterly direction toward communities such as Gas Point, Ono, and Igo. Currently, more than 4,000 firefighters are trying to contain the blaze.

How Did the Fire Spread?

A combination of high heat, shifting and strong winds, dry undergrowth and a steep terrain challenged firefighters. The fire was fueled by the extreme weather as it burned over grasses, trees, and shrubs that had previously been dried out due to the high temperatures that affected the area before the blaze. In fact, July was the hottest it has ever been in the area in recorded history. The sheer energy of the heat stoked by unburned fuels, such as the dried-up ground cover, rose up into a vortex at speeds estimated at 130 mph, helping the firenado to spin faster and rise higher. The whirlwind in the Carr fire lasted approximately 80 minutes and has not appeared again as of this report. However, that capability still exists.

Liability in a Fire

Liability in a wildfire is, in specific instances, difficult to place. Arson and defective products may be responsible for some fires. Others may be linked to utility issues. Some common ways include when a smoker fails to take care of extinguishing a cigarette, children playing with matches, sparks from an unsupervised fire pit, old or improperly installed electrical wiring or food unattended in an oven. In the Carr Fire, a malfunctioning automobile ignited the fire.

Fires can be caused by electrical power lines. In 2017, four blazes in the area north of Sacramento were caused when power lines touched nearby trees. State investigators assigned to the case said that the power company did not maintain a safe distance between the trees and the power lines.

A fire can also be caused by a balloon touching the lines or when power equipment fails. Reports show that Pacific Gas and Electric (PG&E) lines are most often involved and provide electricity to 43 percent of the state. Eighty-one percent of the company’s lines lie overhead compared to other providers such as Southern California Edison (SCE).

In the past, courts had awarded damages when a utility’s power lines or equipment were involved in causing a fire. This liability is not able to be passed on to users in the form of rate hikes unless the utility commission in the state approves it. Cal Fire has said that PG&E was responsible for 16 of the fires in 2017. In addition, Cal Fire said that codes to keep trees and shrubs away from wires were violated by PG&E, a report the company denied. A debate is currently raging in California about the increasing risk of utility-induced fires and the cost of liability. The lawmakers in Sacramento are also looking at ways to decrease the risk of wildfires by updating the electrical system.

I’m Ed Smith, a California Wildfire Lawyer. Fire can cause monumental destruction and result in injury and death. If you or a loved one has been hurt in a fire, reach out to me at (530) 392-9400 or (800) 404-5400 for compassionate, free and friendly advice. I am also available online. Just go to our convenient contact us page.

I’ve helped many Redding residents over the past 36 years recover the compensation they deserve in truck accidents, wrongful deaths, and traumatic brain injuries.

I’ve been awarded membership into the Million Dollar Advocates, a forum of top-ranking attorneys who have obtained a verdict or negotiated a settlement in excess of $1 million for a client.

If you would like more information about my practice, read reviews by my clients and peers on the following pages:

You can also see how I resolved prior cases for clients by taking a look at some of my Settlements and Verdicts.

Editor’s Note: This page has been updated for accuracy and relevancy. [cha 8.24.18]