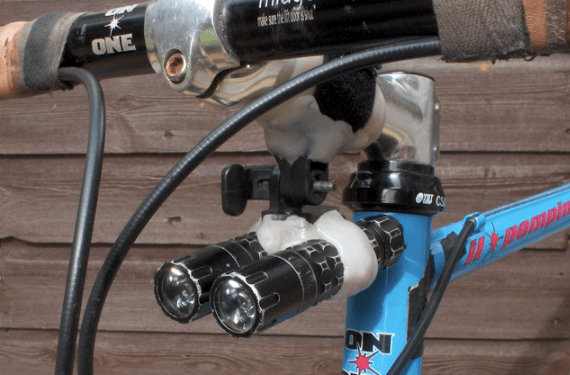 Being Visible While Biking in Davis

We are right in the middle of the darkest days of the year and with night coming early and lasting longer, the city of Davis wants to make sure that bicycle riders are both safe and visible. With so many cyclists on the road, biking visibly in Davis is a big deal.

One of the more common complaints from Davis residents is that bicyclists don’t use proper safety lights when riding during the night. In an effort to fix this issue, the Davis Bike and Pedestrian Program (DPBB) has been handing out bike lights to citizens for free. Officials say that the free lights don’t only benefit cyclists, but also make the roads safer for pedestrians, motorcyclists, and drivers by reducing the likelihood of dangerous accidents.

Since the month of February, Davis has given away over 2,000 bike lights to cyclists riding without them. The light distribution is part of a citywide campaign called Light the Night that aims to make bicyclists more visible. Members of the program have said that providing such a high volume of lights out to community members is a difficult task and has required assistance from the Davis Police Department (DPD) as well as volunteers and various community partner organizations.

On October 25, 2017, the DBPP handed out lights during the Davis Farmers Market in cooperation with the Davis Bike Club, which provided cyclists with theft-abatement devices for their bikes. On November 2, 2017, program members cooperated with Davis Rotary Club in order to install 746 bicycle lights at the Russell Boulevard and Sycamore Lane intersection. Most recently, on November 14, 2017, program members worked with Davis City and Police Department Employees to give away over 500 lights and the Third and A Streets intersection.

Thanks to the City

The DBPP recently thanked the city as well as the UC Davis Police Department for working with them to reduce the frequency of injury-causing accidents. Representatives stated that the program could not have been successful without officers pulling cyclists without lights over and installing the safety devices.

The program also thanked the Davis Bike Club for their donation of $1,000 dollars which helped to purchase around 1,500 lights for distribution.

When riding in the dark, you should always have a white light on the front of your bicycle and a red reflector on the rear. Red rear-lights are even more effective and drastically increase visibility. During the light giveaways officers also stopped a few cyclists who were using red lights on the front of their bicycles.

Having a red front light is dangerous and also illegal. Red front lights can confuse motorists who expect red lights to be heading away from their location and not moving closer.

Also, some officers found that some riders were using the flashlights on their hand-held cell phones instead of a proper bike light. This is not allowed under California Vehicle Code. If a cyclist is going to use their cell-phone flashlight, the light needs to be attached to the person or bicycle. Riding a bike while holding a phone light can reduce your ability to stop and maneuver.

For more than 35 years, I have practiced in the Davis area helping families and individuals with wrongful death and personal injury claims to receive the money they deserve.

I’ve been reviewed on Google, Yelp, and the lawyer-ranking website on Avvo.

I’m in the Million Dollar Advocates Forum. A forum membership indicates that you are a trial lawyer who has won or settled a case worth at least one million dollars.

See my Prior Verdicts and Settlements.

AutoAccident.com is the leading web resource in Northern California for useful information and relevant news about personal injury and auto accidents.