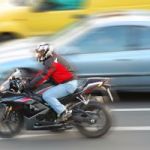 You may see it every day during morning and afternoon commutes.  Given our pleasant weather in the Sacramento area, motorcycles are frequently used as commuter vehicles.  When the automobile traffic is at a stand-still, the motorcyclist will often travel between the lanes, bypassing the bottleneck.

As an automobile driver and traffic observer, when witnessing this maneuver known as “lane-splitting” you may have thought the following:

It may surprise you to learn that the answer to #2, whether the maneuver is legal, is yes.  In California, motorcyclists are legally allowed to travel between lanes.  The answer to #3 was recently tackled by researchers in a year-long study at the University of California, Berkeley.  The study, which was commissioned by the Office of Traffic Safety and the CHP,  found that the practice of lane-splitting is not any more dangerous than riding a motorcycle generally – IF the rider maintains close to the speed of traffic.  If the rider increases his or her speed by more than 10 mph than the surrounding traffic, the danger increases.

Interestingly, the study found that riders that engaged in lane-splitting generally wore better (safer) helmets than riders in general and were less likely to be rear-ended by other vehicles.  It also concluded that during  “rush hours” – morning and afternoon commute times – lane-splitters were more likely than riders that did not utilize the practice to be involved in a crash.

The information in the study was obtained via a supplemental form filled out by 80 law enforcement agencies when writing their reports for over 8,000 collisions involving motorcyclists.  The study did not break down the riders into categories such as age or gender, nor did it look at the characteristics of the involved roadways or motorcycles.  More in-depth analysis will likely be released in the future.

If you or someone you know has been injured while riding, please contact experienced Sacramento motorcycle lawyer, Edward A Smith.

Check our reviews on Yelp and on Avvo.