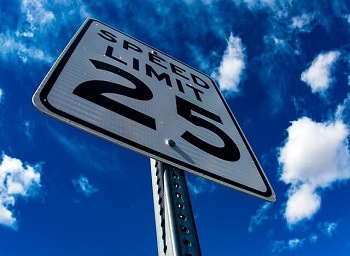 Speed Limit Change – A few Sacramento streets will be undergoing a speed limit change soon, so motorists should take care to avoid getting a ticket from unintentional speeding. The local city council passed a new ordinance on September 4, 2018, following a study. It has not yet been announced when the signs reflecting the lower speed limits will be installed on four local streets. However, it is expected to go into effect soon.

An engineering and traffic survey has to be performed to justify the speed limit. Otherwise, it might be deemed a speed trap. Setting speed limits is not something that is done arbitrarily and has to be justified. A study of the speed limit on a street examines what speeds most motorists are traveling at and uses this to set the limit that equals 85 percent of those drivers. Other considerations may also affect the set speed limit along a street. For example, schools, parks, and homes that are close to the road can justify lowering the speed limit along a particular street because of the higher number of pedestrians.

Speeding in and Around Sacramento

A speed limit change for certain areas in and around Sacramento may help in lowering the number of motor vehicle accidents. The California Office of Traffic Safety compares traffic collisions that cause injuries or fatalities in comparably sized cities in the state. Sacramento ranked second in the number of speeders involved in traffic collisions resulting in deaths or injuries in 2015 with 1,179. Sacramento County ranked first among the 58 counties in California with 2,923 injuries and deaths from traffic accidents.

One of the reasons for a speed limit change along certain streets is the number of collisions caused by speeders. It was reported in 2016 by the National Highway Transportation Safety Administration that speeding contributed to more than 10,000 traffic fatalities that year. This represented 27 percent of all the traffic fatalities in 2016. Speeding, which is a form of reckless driving, contributes to accidents in the following ways:

I’m Ed Smith, a Sacramento car accident lawyer. Getting struck by a speeder can cause serious injuries and mounting medical bills, plus time away from work. If this happens to you or your loved one, I am happy to offer you free and friendly advice for your situation. Just call me at (916) 921-6400 in the Sacramento area or at (800) 404-5400 if you are calling long-distance. In addition, there is a contact us form on my website, AutoAccident.com.

I’ve represented residents of Sacramento and other Northern Californians for more than 36 years in many cases to obtain fair compensation for their injuries. This includes wrongful death, all types of car accidents and brain injuries.

As a long-time member of the Million Dollar Forum, I join with other top trial lawyers around the country who have won in excess of one million dollars for a client through either a case settlement or verdict.

To find out more about some of our previous cases and what others have had to say about my law firm, please visit: