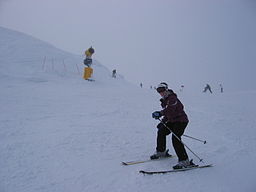 Good news for Californians! According to data collected, skiing and snowboarding, popular sports in California, maintain an excellent safety record.  While one cannot deny there is an inherent risk in any sport including skiing and snowboarding, this sport remains less dangerous that many other local high energy sports.  The National Ski Area Association often publishes safety statistics to determine safety ratios, crunch the typical risk of fatality and injury and determine the amount of  skier vs. skier fatalities that exist.  Using data from the 2011/2012 season they reported 54 fatalities out of 51.0 million skiers and snowboarders who participated in the sport that year. Of those fatalities, thirty-nine of the fatalities were skiers and twelve were snowboards.  Of the fatalities involving skiers, thirty-three of the fatalities were men and six were female. Of the fatalities involving snowboarders, ten of the fatalities involved males and two were female.    The data indicates fatalities skew towards men with 85% of  the fatalities being males between the age of 15-30 years old.  This age and sex group is the same group that data often indicates as being most involved in high risk behavior in other arenas.  The use of helmets by those mortally injured was about 36% of the group.  Based on these figures, the fatality rate is considered low. In other words,  approximately 1.06 per million skier/snowboarder visits.

Fatalities were most often noted on intermediate courses and typically involved a high rate of speed.  While snowboards are seen in the same number, or even greater number, than their skier  counterparts, the data does not indicate that their presence has made the slopes less safe.

What can we do to keep our slopes safe?  Often the same principals we use when driving. Stay in control.  Do not take off until one has looked uphill and determine they are not pulling into the path of another skier.  Obey slow zones and watch for warnings of intersecting areas with other skiers.  Respect other participants.  Stop in a safe place out of the way of moving traffic.  Use helmets.  Take a class if new to the sport to learn basic safety rules and skiing etiquette.  This will keep fatalities low and serious injury down while on the slopes.

It should also be noted that those who are injured while on the slopes and had purchased travel insurance through which they try and present a claim after an injury on the slopes may be surprised to learn that some companies (not all of them) will require the use of a helmet in order for the policy to be liable to make payments to an injured party presenting a claim.  Learn what your policy states before you get on the slopes.

Skiing accidents resulting in death have been mentioned with greater frequency in recent years in the media and press.  Examples of this include the actress Natasha Richardson, the victim of a tragic accident in Canada in 2009 and again in 2013 when Claude Nobs, the 76-year-old founder of the Montreux Jazz Festival died.  Even those with skills that have won them championships like the great Canadian champion freestyle skier, Sarah Burke and Nick Zoricic, a World Cup racer, have lost their lives on the slopes.

Despite this being a relatively safe sport, death and injury may occur at a ski resort.  Please contact an experienced personal injury attorney to discuss the unique aspects of ski injury and fatality claims.

My name is Ed Smith and I have been helping Californians recover for injuries sustained due to the negligence of others.  I have also been helping families recover from the loss of their loved ones in wrongful death claims.  I am experienced in premise liability claims.  While I hope you remain safe the next time you are on the slopes, please call us should the unexpected happen.  My staff and I have an excellent reputation among our peers and past clients. I invite you to learn what other say about their experience with my office on Yelp, Google or Avvo. I can be reached via email at Ed@AutoAccident.Com, my website or via phone (800) 404-5400/(916) 921-6400.