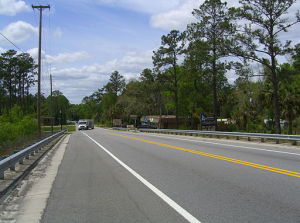 Some injury claims occur when a motorist or passenger is injured due to a lack of roadside maintenance. In situations where failure to properly maintain the trees or vegetative growth on or near a highway results in injury or death, a claim can be pursued against the state or a local responsible governmental agency (either city or county.)

There are established basic principals regarding the government’s ‘duty’ owed the public in regards to roadside maintenance. In summary these principals are:

Some collisions resulting in injury involve cases where a vehicle hits a standing tree.  In many cases, the claim will stem from massive injury to the claimant (plaintiff) or a wrongful death claim in behalf of the relatives of the deceased.

An important factor in auto vs. tree claims will be establishing if there have been prior crashes involving the same tree (or line of trees.)  If so, this would present constructive notice of a condition hazardous to the public. The government will seek to minimize their liability if it is known that the operator of the vehicle was inebriated or not following speed laws, etc.

On the other hand, the actual location of the tree that was struck will also play a role. In one case, Carney v. Department of Transportation,  the plaintiff drove off the paved roadway and down an embankment where her car eventually struck a tree. In this case, the court held the government did not breach their duty as the tree was not within reach of the vehicle had the vehicle remained on the paved road or on the shoulder of the road. The court contended the driver of the car was outside her ‘right of way ‘when she drove off the paved road. In the case, the court also contended that the county provided reasonable maintenance to growth around the road but was not required to cut down all trees and vegetation if they do not constitute a safety hazard. In the Carney v. Department of Transportation it was not established there was ever any notice of that particular growth of trees being involved in any other collision before as the trees were some distance from the roadway.

Notice the difference though in the case of Peterson v. Department of Transportation. In this case an oil tanker truck slipped off the road and down an embankment and into a tree resulting in the tanker truck catching fire. The driver died. In this case, the government was considered liable because it was determined that the driver slipped over a very small barrier curb (it was only 2.5 inches wide) between the paved surface of the road and the shoulder of the road. Since there had been previous warning of other vehicles slipping at that same location due to the barrier curb being so small and it was proved no repair ever being made it to the road despite complaints of the size of the curb, it was determined that the government was responsible for the vehicle striking the tree.

A few claims involving roadside maintenance may exist due to a tree falling on a person or property. In claims involving a fallen tree causing injury, an ‘act of God’ situation must be ruled out. In other words, if the tree was healthy, and properly maintained but a severe hurricane or storm cause it to fall, the government would be shielded from liability. However, it it is proven that the tree fell due to being diseased and there was notice to the government that the tree was diseased, in this case, they would be liable.

It cannot be stated enough that those who believe they  have a claim against a governmental agency due to roadside maintenance issues should contact a personal injury lawyer immediately.  These claims involve shortened time limits requiring a claim to be filed in as little as six months from the injury date.

The Edward A Smith Law Offices (also known as AutoAccident.com) would be happy to provide a no fee consultation to discuss if you have a viable claim against a governmental agency due to failure to provide proper roadside maintenance.  Additionally, we encourage you to learn about how other clients have felt about their experience with the Edward A Smith Law Offices.  You can read client reviews on Facebook, Avvo (an attorney rating system), Yelp and Google. Please feel free to call us at 916.921.6400.