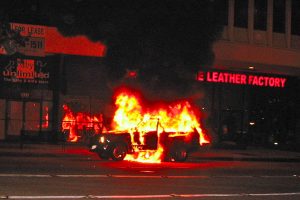 Authorities are still investigating the cause of a two-vehicle wreck that ended in a car fire and major injuries for one person involved. The California Highway Patrol (CHP) reports that the accident was allegedly caused by Lawrence C. Alexander, a 46-year-old resident of Smartsville. Alexander was driving a white Chevrolet 1500 pickup truck behind the second victim, an unnamed 28-year-old and a passenger who were driving a gray Dodge pickup truck. The occupants of the second vehicle dialed 911 to report aggressive, erratic and threatening behavior from Alexander as he drove behind them. The two reported that Lawrence was brandishing a weapon in a threatening manner, along with tailgating.

As the two vehicles drew close to Brunswick Road heading south, Lawrence Alexander pulled his Chevrolet into the left lane and accelerated as if to pass the Dodge. Instead of passing and continuing onwards, Lawrence is accused of turning into the other pickup in an attempt to ram it off of the roadway. The resulting impact caused both vehicles to leave the highway. The victim’s truck came to a stop south of the overpass while Alexander’s white Chevrolet crossed the on-ramp and struck a tree which sent the vehicle into the steep gravel embankment of the overpass where it caught fire.

The California Highway Patrol arrived soon after the car accident as they were already on their way because of the 911 call. Officers saw Lawrence Alexander emerge from the burning vehicle and attempt to escape the scene on foot. He was quickly stopped and detained before escaping and was transported to a hospital for major injuries. The other two victims involved did not report any injuries to the officers. Investigators did not find any weapons on the suspect or in his vehicle. They determined that the two vehicles first met west of Harmony Bridge Road on Highway 20 with Alexander driving behind the gray Dodge the entire time until the accident.

The aforementioned incident resulted in injuries to only the suspect who has been accused of causing the accident with the attempt to ram the other driver off of the road. The sharp turning of the steering wheel might have caused the white Chevy to lose control before and after the initial collision with the Dodge. The following collisions that stopped the vehicle were likely the most forceful considering the freeway speeds of the two vehicles. Dashboard knee, as well as extremity trauma could have occurred if the suspect was wearing his seatbelt. If he was not wearing a seatbelt, we can also factor in head trauma from either the dashboard or windshield as a possible injury.

After the Chevrolet came to a halt, the car caught fire. If the flames had spread rapidly, burns could have also been among Lawrence’s sustained injuries. Smoke inhalation could have also caused carbon monoxide poisoning which doesn’t allow the oxygen to leave your red blood cells and enter the tissues of your body. This could cause problems with the respiratory system.

I’m Ed Smith, a Grass Valley Car Accident Lawyer. If you or someone you care about has been hurt or killed in an accident, please call my office at 530-392-9400 or 800-404-5400 to receive free, friendly legal advice. I have been working accident and personal injury cases in Grass Valley and Northern California area for 35 years. Look over my past verdicts and settlements page on my website, autoaccident.com to see how I have helped others.

I am a forum member on milliondollaradvocates.com