Traumatic injury is far and away the leading cause of death in children in the United States, and a major portion of those traumatic fatalities are due to traffic accidents — for ages 11 through 14, traffic accidents are the leading cause of mortality in the U.S. For the most recent year for which full data is available (2012), more than 1,100 children under the age of 15 died in traffic fatalities in this country, and more than 160,000 were injured. Protecting children from traffic accident injury has been a top goal of safety analysts and regulators for years. 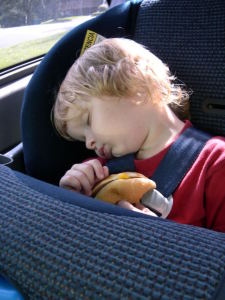 The proper use of car seats, seat belts and lap/shoulder belts is especially effective at protecting children from traffic accident injury. For crashes involving passenger cars, seat belts cut the fatality rate in half, and for crashes involving light-trucks (including many SUVs) the rate is cut by nearly two-thirds. Child safety seats used in passenger cars reduce fatalities among infants by more than 70% and by more than 50% among toddlers. Numbers from 2012 suggest that if all children under 5 years of age were in car seats, approximately 340 lives could have been saved in that year. Of course, restraints such as seat belts, child safety seats, and booster seats must be used in accordance with the instructions for each — improper use can actually increase the chance of certain types of injuries.

Children are particularly vulnerable to injury as pedestrians. More than one-fifth of the child traffic incident fatalities in 2012 were as pedestrians. Children face the double threat of their small size, which makes them less visible to motorists, along with their relative lack of maturity and tendency to move toward traffic when they should not — three-quarters of child pedestrian fatalities did not occur at intersections, meaning that the children were in roadways in the middle of blocks rather than at intersections where protections such as pedestrian traffic signals and marked crosswalks could have helped prevent injuries. Increased educational efforts can reduce this danger.

Injuries in vehicle vs. bicycle incidents are also a vulnerable point for children, though substantially decreased rates of fatalities among older children in recent years have been observed and credited in large part to the increased mandatory use of helmets for young bicyclists.

A major cause of fatal car crashes involving children is alcohol use. Approximately 1 in 5 of the children killed in motor vehicle accidents were in crashes involving drunk drivers, and slightly more than half of those were passengers in vehicles who drivers had blood alcohol of .08 or higher — the legal limit in California. Think about those numbers for a moment — half of the children killed due to alcohol-related accidents were killed because their own drivers were drunk. One of the best ways of protecting children from traffic accident injury is for parents simply not to drink and drive, and to be aware of the condition of other people who may be transporting their children.

If you or your child has suffered a serious injury in a motor vehicle collision or other traumatic event, call me now at 916.921.6400.