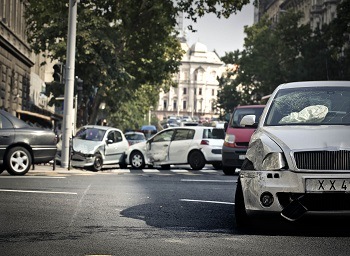 Multiple Vehicle Crash in Sacramento Was a Hit and Run

I’m Ed Smith, a Sacramento car accident lawyer. An early morning hit and run collision on July 23, 2018, caused an injury to one woman when three vehicles collided along Madison Avenue. The incident was investigated by the California Highway Patrol (CHP), who said that at least part of the collision was caught on traffic cameras. The injured person was found at the Starbucks near Hillsdale. It is unknown at this time whether that person required medical attention at the scene or was transported to a nearby hospital

According to a CHP report, the collision happened near Madison and Date Avenue just before 8:00 in the morning and involved a black Mercedes, Ford Fusion, and a pickup truck. The white pickup truck was crashed into by the Mercedes. One of the vehicles struck the car of the person who reported the collision. It was said that it appeared as though the Mercedes and Ford might have been chasing each other. One of the vehicles spun out in front of another car and crashed into a pole. The first and second lanes were blocked by the accident, while the number three lane remained open. The collision is being investigated as to cause, and the names of those who were involved have not been released by authorities.

In all types of accidents, 94 percent can be attributed to driver error. According to the National Highway Transportation Safety Administration, as high as 33 percent of those collisions may involve behaviors described as aggressive driving or road rage.

Some motorists may be surprised at what constitutes an aggressive driver. Following are some of the examples of this behavior:

While exhibiting aggressive driving includes dangerous maneuvers that can cause a collision, road rage involves anger. When convicted of road rage, the driver may have their California license suspended, be sentenced to a jail term and be heavily fined. Examples of road rage are as follows:

Evidence is an important factor in a motor vehicle accident. Aside from taking pictures of the scene, one of the most important pieces of evidence is often obtained from CCTV video. Video capture cameras are often found on traffic lights. In the event a video traffic camera is not found, local businesses often have video cameras outside of their establishment. Your car accident lawyer will be able to secure the footage and use it to show fault in a collision. It is also useful in a hit and run accident to help identify a runaway vehicle.

I’m Ed Smith, a Sacramento car accident lawyer. Road rage and aggressive driving collisions have become all too common and lead to injuries and fatalities. If you or your family member was injured by a driver exhibiting aggressive driving or road rage, I can offer you free and friendly advice. Contact me in my Sacramento office at (916) 921-6400 or for those elsewhere in Northern California, call me at (800) 404-5400.

I have been in practice as an injury lawyer for more than 36 years, representing those who have suffered injuries caused by the negligence of another driver or entity. During those years, I’ve helped many individuals with all types of car accidents and in wrongful death cases.

Million Dollar Forum represents the top trial lawyers around the nation who have demonstrated a settlement or verdict for a client worth more than one million US dollars. I belong to this forum as a California member.

Knowing as much as possible about a law practice before calling is a good idea when looking for legal help. You are invited to look over reviews and comments left by my former clients and a list of some of our previous cases on the following sites: