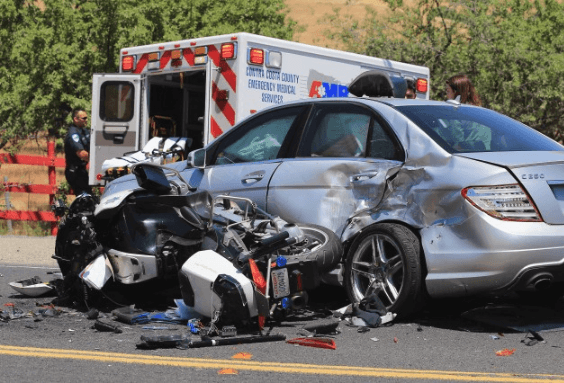 I’m Ed Smith, a Eureka personal injury lawyer. One local man was sent to a hospital after he received injuries in a collision that took place in Eureka on Tuesday, June 12, 2018. Officers from California Highway Patrol (CHP) reported that the accident happened during the early afternoon and added that the crash only involved one vehicle in addition to a motorcycle. The CHP says that they are still in the process of investigating the accident to find out what factors may have been involved. Updates on the condition of the injured man have not yet been reported by medical officials.

According to reports from CHP, a crash took place just after 12:00 p.m. on Myrtle Avenue. Officers reported that a white-colored sedan had been driving south on Myrtle when the driver stopped suddenly to avoid striking a pedestrian who had been crossing the road. A motorcyclist driving south behind the sedan was not able to stop his vehicle quickly enough to avoid a crash and struck the rear-end of the sedan on the driver’s side. Officers did not report how fast the motorcycle had been traveling when the collision took place.

After they were notified that a motorcyclist may have been seriously injured during a crash, CHP sent out responders to the accident site. Responding officials reported that they found the motorcyclist with an injured wrist. The man was put in an ambulance and taken to a local hospital to be treated.

Neither the pedestrian nor the driver of the sedan was reported to have been injured as a result of this crash.

Officers have not yet reported what they suspect may have caused this accident. However, CHP has stated that driving under the influence of alcohol and/or drugs does not seem to have been a factor. Other factors that may have contributed to this accident include things like driver distraction, speeding, faulty brakes, pedestrian right-of-way violations, and more.

When people are injured in auto accidents, they are often left unable to perform tasks that their job requires. Arm and leg injuries frequently leave people unable to work, and losing a source of income can be devastating. However, injured individuals are often able to claim repayment for the income they have lost because of their accident injuries.

However, certain requirements need to be met for injured individuals to claim loss of income payments. To learn about how you can recover for loss of income, get in touch with an experienced personal injury lawyer.

I’m Ed Smith, a Eureka personal injury lawyer. Crashes can leave people with lasting trauma. If an accident has left you with severe injuries, contact me at (800) 404-5400 or (707) 564-1900 for some friendly advice for free. You can contact me by using AutoAccident.com as well.

I have helped residents of Eureka to recover for personal injury and wrongful death damages since 1982.

My clients have reviewed me on:

I am in the Million Dollar Advocates Forum, the national forum of trial lawyers who have won their clients over $1,000,000 through a single settlement or verdict.