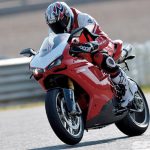 However, there are valid reasons to seriously consider adding uninsured/underinsured motorist coverage to your motorcycle insurance policy and making sure the limits for this coverage are more than the state’s minimum requirement of $15,000.00. As already discussed considerably in this blog and other journals, the risk of severe injury to a motorcyclist is many times greater than to an automobile driver. Injuries in an auto versus motorcycle accident are more likely to include broken bones or head injury requiring immediate emergency transport to an emergency room via ambulance. In 2014, a conservative estimate of the cost of an emergency room hospital visit in Sacramento county, including an MRI of the head, with discharge the same day can easily be in the $10,000.00 to $15,000.00 range. Transport via ambulance to the emergency room in 2014 is approximately $2,500.00 to $3,500.00. What does this mean for the motorcyclist?

Well, in this scenario, let’s imagine that the auto that struck the motorcyclist has insurance coverage of only $15,000.00. (This is the minimum limit California law requires and is the only coverage many California drivers carry.) As discussed above, the medical bills for the ER and ambulance have totaled approximately $12,500.00 to $18,500.00. In this scenario, that would leave the motorcyclist (if the ER bill and ambulance were at the lower end of the spectrum valued at $12,500.00) at most with $2,500.00 for additional medical bills, wage loss, prescriptions and for pain and suffering. If the ER and ambulance bill is on the higher end of the spectrum, say $18,500.00, it leaves the motorcyclist in debt by $3,500.00.

A person may reason, ‘I have health insurance. I won’t have any medical bills out of pocket so this does not apply to me.’ However,  be advised that California law allows your health insurance to submit a claim for subrogation (or reimbursement) against the insurance of the person who hit you and/or against yourself if you collect reimbursement from the insurance company of the person who hit your motorcycle and injured you.  Their request for reimbursement will be for the full amount of your medical bill.

If a motorcyclist has broken a bone, his ability to return to work may be hampered. Depending on the severity of the trauma, physical therapy may be needed. In short, thousands of dollars may be lost in wages and more funds may be needed to cover additional medical bills. This is why purchasing uninsured/underinsured motorist coverage greater than $15,000.00 is strongly encouraged. This coverage would allow an injured motorcyclist to collect reimbursement for lost wages and/or other medical bills that may arise from his own insurance carrier under his own underinsured motorist coverage.

We often purchase insurance for our motorcycle within hours or days of buying the bike itself. In that moment of just making a large purchase, we often don’t enjoy forking over yet more money for insurance. In fact, many feel resentful towards the insurance agents who try and encourage people to buy higher limits for their own protection. Try and remember that we don’t know when trouble will strike. It is good to be ready and have enough uninsured/underinsured coverage to rescue us when we need it.

If you have been hurt in an accident, contact our Sacramento motorcycle personal injury lawyers at the Edward A Smith Law Offices for a free consultation by calling (800) 404-5400 or (916) 921-6400.  You can also look at the website for the Edward A Smith Law Offices to find out more about their practice, settlements and to answer any questions you may have.  Founder, Edward A Smith, is the author of the California Motorcycle Accident Handbook, which is available by calling our office for a copy and can be purchased for Kindle download via Amazon.