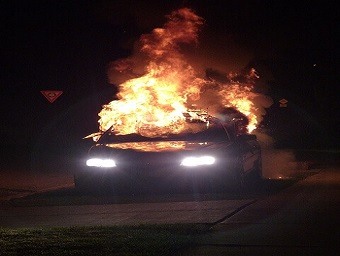 I’m Ed Smith, a Woodland car accident lawyer. A serious collision in Woodland resulted in injuries and the closure of Interstate 5 southbound on June 16 due to a car fire and extensive damage to the bridge. Major injuries were reported in the two-vehicle collision. All of the southbound lanes of Interstate 5 were blocked by the accident and traffic diverted onto County Road 22 as a result. A SigAlert was put in place according to the California Highway Patrol (CHP) and was expected to continue until at least 9:30 in the morning while Hazmat crews cleared spilled diesel fuel. Crews fought the flames from the accident and workers began to repair the damage to the bridge.

The collision occurred on Vietnam Veterans Bridge just after 3:00 in the morning when a Corvette collided with a forklift type vehicle that was hauling hay. The Corvette quickly became engulfed in flames. As a result of the collision, the forklift punctured the guardrail on the bridge, knocking out about 40 feet and spilling diesel fuel. Around 70 gallons of fuel were reported by the CHP to have poured over the side of the bridge onto the ground below, necessitating a Hazmat crew to attend to the cleanup. It was also reported that the driver of the Corvette may have been drinking and driving recklessly just before the accident. Traffic was backed up, making it difficult for emergency responders to reach the scene of the accident.

Flammable liquids are the leading cause of fires in an accident and result in 36 percent of highway fatal fires and 37 percent of deaths. In 2009 alone, there were 220,000 motor vehicle fires, resulting in 280 deaths and approximately 1,600 injuries.

Vehicle fires are primarily caused by both driver error and automotive defects. Some examples are:

Burns in a Traffic Collision

Burn injuries in car accidents are generally severe with motor vehicle occupants suffering injury over 90 percent of their bodies. Burns in such cases are usually defined as third-degree, which extensively damages all skin layers and fat deposits. Fourth-degree burns, where tendon and bones, as well as skin and fat layers, are involved, also happen. Usually, these are fatal. Infection is a threat in all types of burns, and hospitalization in a burn unit is usually required. This is followed by long periods of rehabilitation and surgeries.

I’m Ed Smith, a Woodland car accident lawyer. If you have been involved in a car accident, you understand the horror of the situation that leads to injury, lost wages, and medical expenses. Reach out to me for friendly and free advice at (530) 392-9400 in the Woodland area or (800) 404-5400 long-distance. You can also contact me online by using my contact us page.

I’ve helped Woodland residents and those who live in other areas of Northern California with catastrophic injuries, obtaining the compensation they deserve.

When you are getting ready to hire an attorney, you need to know about their practice. Learn about mine by reading client and peer reviews and how I resolved previous cases at:

I belong to the Million Dollar Advocates. We are a nationwide group of experienced trial attorneys who have won verdicts and settlements for a client in excess of $1 million.