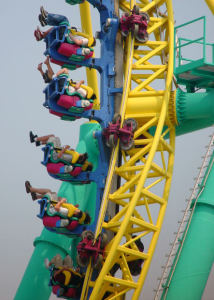 Have you ever wondered who is liable if you get injured while riding a roller coaster?  We’ve all seen the dramatic footage of unfortunate thrill seekers hanging suspended from a malfunctioning roller coaster, precariously dangling and hoping for a quick repair.  Many times, the damage to the park visitor is simply more thrills than he or she bargained for, but sometimes physical injuries do happen.  On average, about 5-7 amusement park accidents happen per year in California.  Sometimes even being stuck for hours in an awkward position while waiting for the ride to be fixed is enough to cause soft tissue injuries such as neck and back strain.  Unfortunately there have even been cases where freak roller coaster accidents have resulted in passenger deaths.

Some people may think that riding a “thrill ride” means that they assume some risk of injury and that perhaps the amusement park is absolved of liability, or fault.  However, the courts in California have not found that to be the case.  In fact, they hold the amusement parks to a high standard of care with regard to roller coasters.  When there is negligence involved, such as when a pine tree fell and landed across the tracks of a roller coaster in Southern California, resulting in injuries, the injured parties have a valid cause of action against the park.

California courts have held that a rider should not face any more risk on a roller coaster than they would when riding an elevator or regional bus.  Roller coasters have been found to fall under the category of  “common carrier”, which is when a party accepts money to transport a person.  Such transportation falls under common carrier liability and the degree of care is much higher than that held to an average person.

This means that riding a roller coaster is pretty safe, as long as the rider is healthy.  Cal-OSHA inspects amusement park rides in California once per year.  However, as a quick search of youtube will show you, accidents still can happen.

You can find out more about our office by looking either Yelp or on Avvo.