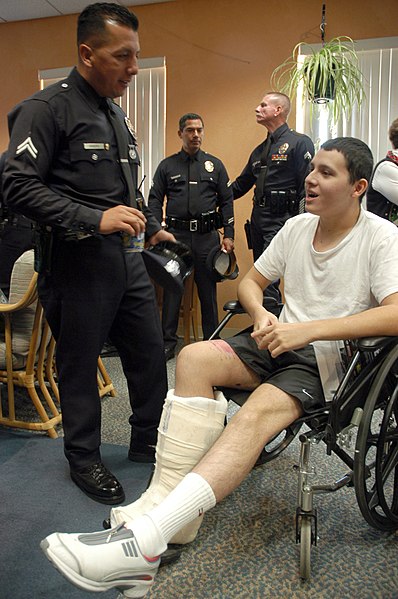 I’m Ed Smith, a Sacramento Workers’ Compensation Lawyer. When an employee is hurt in an accident at work, they are typically covered under workers compensation benefits, including medical care, both permanent and temporary disability benefits, vouchers to help pay for retraining, and even death benefits. Certain government employees are additionally statutorily covered by the labor code. A recent case concerning a sheriff’s deputy’s workplace injury has brought the matter to the courts, resulting in a contentious interpretation of the legal code.

Injured in the Line of Duty

An employee of the San Diego County Sheriff’s office, sustained an industrial injury and received workers compensation benefits in 2010- the year of the incident- as well as disability benefits in 2015. Because he was a deputy sheriff’s officer, his temporary and permanent disability claims were covered under Labor Code Section 4850.  This section states that full-time, regular public employees like city police officers, firefighters, and sheriffs are entitled to a paid leave of absence instead of temporary disability payments in the event of certain work-related injuries. Eligible employees can receive benefits for 104 paid weeks over a five-year period.

San Diego County paid out all of the employee’s temporary disability and 4850 benefits through 2015, five years after the initial injury. His injuries, however, have persisted and rendered him temporarily disabled beyond the five-year limitation- despite having not received the maximum 104 compensable weeks. The administrative law judges who heard his case concluded that his petition to reopen the case and seek new and further temporary disability benefits was valid because he was still limited to a total of 104 weeks of benefits and had filed his request in a timely fashion prior to the fifth anniversary of the injury.

One judge on the appeals board, a commissioner, offered a dissent. The language in the relevant section of legal code is the argument for both sides of the issue, with advocates suggesting that it does not exclude temporary disability occurring within but persisting beyond the five-year limitation. The dissenting opinion is that the language does expressly limit the award to five years from the date of the applicable injury. The matter will soon be taken up by the Court of Appeals.

I’m Ed Smith, a Sacramento Workers’ Compensation Lawyer. Have you or someone you love been injured in a work-related accident and need help navigating the claims process? Please contact me right away at (916) 921-6400 or (800) 404-5400 for free and friendly advice with no obligation. I can also be reached online at AutoAccident.com.

Since 1982, I have been serving my community helping those individuals hurt in accidents and their families recover. Find some of my valued client reviews online via: Avvo, Yelp and Google.

My advocacy has earned me the recognition of the Million Dollar Forum. This group is reserved for trial lawyers with verdict judgment and settlement awards in excess of $1 Million.

See some of my past Verdicts and Settlements on my website.