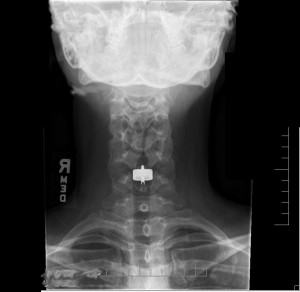 In a previous blog, I wrote about dysphagia.  Dysphagia is a complication that occurs in some people after a cervical spine surgery.

In a nutshell, dysphagia is a condition where a person has difficulty swallowing.  My previous blog discussed  what dysphagia symptoms include as well as some of the reasons why cervical spinal surgery causes dysphagia.  It should be noted that dysphagia is not a complication that occurs in all people who have cervical spine surgery.  However, certain groups of people have a greater risk for this complication.

Several prospective studies and cadaver studies performed by physicians have helped the medical community obtain an improved understanding of this surgical complication.

At one point it was believed that pre-existing swallowing issues may be a risk factor.  However, one study involving 23 patients had all patients submit to barium swallowing tests pre-operatively and post-operatively.  The test indicated that 11 of the 23 patients had asymptomatic swallowing abnormalities prior to the surgery.  Of these 11 patients who had pre-existing swallowing abnormalities only one had worse function after the surgery.  Curiously, 3 of the patients actually experienced improvement in their ability to swallow.  The other 7 patients swallowing function was unchanged.  (Additional information on this medical study can be found by researching the study,  J Spinal Disord Tech. 2002 Oct;15(5):362-8)

Another medical study involved 249 patients who underwent cervical surgery.  This study demonstrated that those suffering from dysphagia had risk factors that included the age of the patient, the gender (predominately females are affected), and the number/location of locations operated on also seem to play a role.  The greater the number of locations that require hardware or fusion of the spine the greater the risk of this complication.

A study based out of the Veteran’s Affairs Medical Center also had interesting results.  It should be noted that nearly all of the 83 patients evaluated in this study were male so gender could not be analyzed in this study.  This study showed that age was the greatest risk factor, typically, increased risk of dysphagia was seen in those greater than 60 years of age.  What is of note is that while many of the patients had pre-existing diagnosis of hypertension, diabetes, pulmonary disease, alcohol/substance abuse and cancer, these issues did not seem to play a role in increasing risk.  This study was published in Spine, 29(13): 1441-6, 2004.

The end result of these multiple studies all demonstrate that approximately 50% of patients will have some level of difficulty swallowing after their surgery.  Risk factors include age, gender, multiple locations of operation.

Most of the patients improved at the 6 month mark. Female patients however were plagued by this issue for longer periods of time.  10% of females still had issues with dsyphagia 12 months post surgery.

If you or someone you love has been injured in an automobile accident due to the negligence of another, please call me at (916) 921-6400 for free, friendly advice.

Please check out what my clients have to say about working with our law firm. Click on our reviews here: Yelp and Avvo and Google.

Our firm is a member of Million Dollar Advocates Forum.   This is an association of national personal injury lawyers who have multiple Million Dollar Verdicts and settlements.