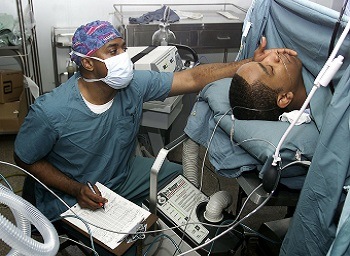 A lawsuit is slated to be heard in superior court in Santa Clara June 2018 against the Intuitive Surgical da Vinci robotic surgery system. The plaintiff said the system was responsible for intestinal trauma that has led to multiple corrective surgeries over the past seven years.

Intuitive Surgical, with headquarters in Sunnyvale, California, won FDA approval for its robotic surgical system in 2000. Robotic surgery allows a surgeon to operate using a robot to perform the actual surgery by manipulating a joystick and other devices while using a camera inside the body. The surgery is minimally invasive, meaning the incision is small – generally one-quarter of an inch – allowing for quicker recovery times. The company contends it is a safe, efficient way to perform a host of different surgeries, ranging from gynecological to cardiac with less bleeding than regular open surgery.

A leading, non-profit organization in Pennsylvania, ECRI Institute, that examines health care procedures, said that while robotic surgery is not necessarily better than conventional surgery, most issues occur from problems with hardware or software as well as human error. Training is a key element, according to a surgeon who does appreciable numbers of robotic surgeries. Without experience using the robotic tool, the surgery may be problematic, the surgeon concluded.

Over the years 2004 to 2013, Intuitive Surgical robots were used in 1.7 million operations. During that time, 3,000 claims for product liability were filed. For that period, Intuitive said it had $67 million reserved to use as settlements. The claims, according to the company, were due to device components in many cases. Recent reports, many from 2012 and 2013, show the company is facing many claims as well as 52 individual lawsuits claiming wrongful death or injury from multiple states, blaming the robotic system for problems.

One case in 2016 was settled in court over issues with a robotic-assisted hysterectomy. Another involves a case where the plaintiff claims that the surgeon was not trained adequately on the device, causing harm to the patient. The third, involving organ damage, is slated to begin in June. The plaintiff, in that case, refused to settle.

What Is Product Liability?

Product liability involves dangerous or defective products that cause injury or death to individuals. Liability rests with both the manufacturer and the seller of the product. In California, such claims are processed under the state’s system of strict liability. All products used and made in California, including medical devices, are included. Beyond that, the liability for damages faces everyone in the supply chain, including those who design, manufacture, produce and distribute the products. In fact, the injured party can be the person who uses the product or the recipient of injury due to the product’s defect.

Defects can be identified according to type:

Under this principle, a plaintiff is freed from proving the defendants are negligent. Proving negligence for the design or manufacture of a product is a costly endeavor. Strict liability laws allow the injured victim to ask for compensation without having to prove negligence. You must only prove three factors:

I’ve helped many Californians in Sacramento and elsewhere around the state as an injury lawyer with their defective medical device cases, including IVC blood clot filters, transvaginal mesh, metal on metal hip implants, Olympus scopes and power morcellators.

The Million Dollar Advocates is a forum of top-ranked trial lawyers who have won cases for $1 million dollars. I belong to the group as a California member.

If you would like to see how I resolved some cases, including catastrophic injury cases such as traumatic brain injury and wrongful death, go to my settlements and verdicts page. You can also see how former clients and some of my peers feel about my legal practice on Google, Avvo, and Yelp.

Stay on my website, AutoAccident.com, to read about topics in personal injury law.