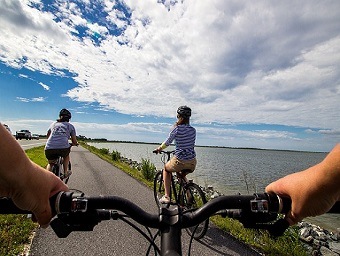 I’m Ed Smith, a North Highlands personal injury lawyer. With more people riding bicycles for pleasure, exercise and to go to work, the odds of being involved in a crash with a motor vehicle increases. Finding ways to increase safety while bike riding is important and may give a rider the edge needed to avoid a crash.

The Insurance Institute for Highway Safety says that motor vehicle crashes occur with a bicyclist at a rate of 2 percent. While this might not seem like a high number, it still resulted in 817 bicyclist deaths in 2015. This number was updated later by the National Highway Traffic Safety Administration to 818. The majority of bicyclist deaths caused by collisions with motor vehicles occurred in July, followed by June. The fewest number were in March.

The Pedestrian and Bicycle Information Center reports that In 2015, injuries of bicyclists as a result of motor vehicle collisions dropped to 45,000 from 50,000 the year before. However, it pointed out that many bicycle accident injuries go unreported.

Head injuries are the most common cause of death in a bicycle accident, according to WebMD. Other types of injuries include:

I’m Ed Smith, a North Highlands personal injury lawyer. When you have been injured in a bicycle accident by a negligent driver, call . I am honored to give you my friendly, free advice about your accident situation. You can also call at (800) 404-5400.

For reviews and comments by clients, visit:

The more information you have about an injury lawyer before placing a call, the better. Please visit verdicts and settlements at my website, AutoAccident.com.

I belong to the nationally known Million Dollar Advocates Forum, a group of trial attorneys with million dollar settlements and/or verdicts for clients.

I’ve worked as a personal injury attorney in North Highlands defending the rights of accident victims for 35 years. As such, I have extensive experience in all types of traumatic injury claims and wrongful death cases.