A study performed in Auckland region of New Zealand from February 1993 to February 1996 was done to estimate the risk of crash when conspicuity measures were put into place. This study included taking into consideration such variables such as the use of color protective clothing.

While this blog discusses the Auckland study, it is also understood that despite any measure a motorcyclist may take to prevent collision – including the use of color protective clothing – there are simply no guarantees that they are 100% effective. While the use of color protective clothing can decrease to some degree the risk of a collision, a motorcyclist still must battle other limiting visibility factors, including poor roadway illumination, a motorcycle size that may be difficult for motorists to see, or difficulty seeing the rider due to the contrast of the background environment.

Nonetheless, there are some compelling reasons for motorcyclists to look into the use of reflective or fluorescent clothing while riding. The 2004 Auckland study revealed that those motorcyclists wearing reflective or fluorescent clothing had a 37% lower risk of collision. Another factor that helped drivers spot motorcyclists with greater ease was the use of a white helmet. The Auckland study indicated that the use of a while helmet decreased the risk of a collision by 24%. For riders using neither a white or black helmet but still using a lighter colored helmet decreased the risk of a collision by 19%. The study also mentions that while the use of this reflective or fluorescent clothing would reduce risk of collision this was only true in areas where the motorcyclist would be illuminated in some way – either by street lights or by headlights of the oncoming auto. Therefore, when comparing the risk of collision in city settings versus rural settings where less street illumination exists the reflective clothing had a decreased impact in reducing risk in rural settings. 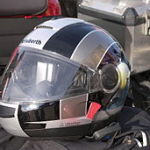 Besides the color of helmet, the study also researched if color choice for clothes would in any way decrease the risk of a motorcycle versus auto collision. The colors studied were black, red, white, chrome, silver and blue on the upper body. Interestingly, the study indicated that there was no association of collision or an increase or decreased risk of collision associated with the color of the motorcyclists clothing.

In conclusion, reflective or fluorescent garments and the use of lighter colored helmets were found to increase the motorcyclist’s visibility in those situations where sufficient illumination exists.

Despite motorcyclists taking precautionary measures, a collision may still occur. If you have been involved in a collision while on a motorcycle and would like some advice from a personal injury attorney on how to handle your claim, please feel free to call the Edward A Smith Law Offices at (800) 404-5400.  The Edward A Smith Law Offices (AutoAccident.com) is a law firm assisting victims of serious injuries in the Sacramento, Placer and Yolo counties. The ownerr, Edward A Smith, is a member of the State Bar of California, Sacramento County Bar Association, Consumer Attorneys of California, Capital City Trial Lawyers Association, American Trial Lawyers Association and the Million Dollar Forum.  Edward A Smith is also the author of the book, California Motorcycle Accident Handbook, which is available on Amazon on Kindle format.