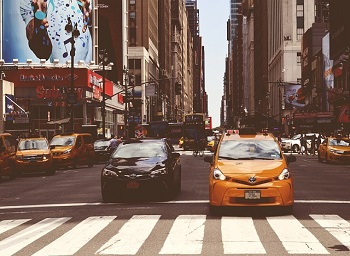 I’m Ed Smith, a Modesto car accident lawyer. Statistics show that the color of your vehicle may affect the number of accidents you have. While safe driving techniques are essential, color may be an added factor in avoiding accidents. Let’s take a look at why a car crash may happen.

No large-scale studies have been done in the United States. Anecdotal testimony from car owners is mixed. Some drivers report that silver cars are most likely to be hit in daylight hours, particularly on cloudy days. This is supported by the fact that silver or grey cars blend in with the environment. In addition, silver vehicles tend to be almost invisible in direct sunlight. Black and red vehicles are difficult to see at night. Red is visualized as black in the dark. Yellow has long been associated with safety since it is readily seen both during the day and at night. White is also visible at night but not always visible during the day depending on the weather.

White cars were shown to be one of the safest colors, according to a large Australian study in the late 90’s. Monash University researchers strove to determine which color was the safest. The study looked at a comparison between crash risk and color. Results showed a reproducible correlation between the two. The study showed that vehicles in silver, black, red, green and blue had a greater propensity for accidents. Under daytime visibility, black had a 47 percent higher risk than white. Grey was 25 percent higher and silver 15 percent greater than white.  White was consistently the color associated with lower crash risk.

Many variables affect driver safety. For instance, driving at night is more dangerous than daylight driving according to the National Highway Traffic Safety Administration (NHTSA). Apart from diminished visibility, other factors exist. Drunk driving and fatigued driving are both higher at night. Fifty-four percent of alcohol-related fatal crashes happen at night. This compares with only 18 percent during the day. About 66 percent of drivers in crashes at night are not wearing a seat restraints. In addition, fatality rates are three times higher at night. Alternately, the least number of fatalities happen in the early morning between four and five.

Distracted driving is a constant problem for motorists. Multitasking has no place when driving, yet many do it. Texting and talking on the phone are two prime reasons drivers are distracted. Other activities such as eating, putting on makeup, changing the radio or looking at GPS all have the same effect. The result of driving distracted in 2015 was that 3,477 people died and about 391,000 individuals were injured. Among all age groups, teens had the highest rate of fatalities. In California, talking on a hand-held cell phone or texting is banned.

Falling asleep at the wheel results in catastrophic accidents. However, driving while drowsy has consequences of its own.

Some professions and groups are more inclined to drive while drowsy.

Individuals with young families may not be able to sleep properly at night. Likewise, students who spend the night cramming may not be wide awake when driving. According to studies, the rhythm of the vehicle induces sleepiness.

I’m Ed Smith, a Modesto car accident lawyer. Car crashes happen for a variety of reasons. When they happen due to negligence, you or a family member may experience traumatic injuries or death. Please feel free to call me at (209) 227-1931 or toll-free at (800) 404-5400 for free, friendly advice.

I’ve provided assistance to numerous Northern California residents, including those in Modesto, since 1982. I’ve helped them with wrongful death and traumatic brain injuries. Whether it was a car, truck or motorcycle accident, I’ve been at their side from start to finish.

I was selected to join a nationwide group of trial lawyers who win $1 million or more for clients. Look at the Million Dollar Advocates website to learn more.

Would you like to know more about me? Review comments on Avvo, Yelp and Google.

Explore my verdicts and settlements page on AutoAccidents.com to see how I helped other clients.