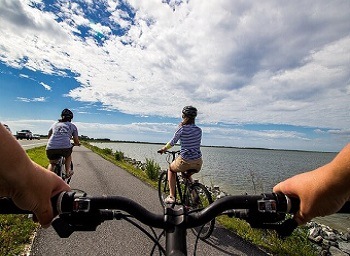 California in general and Davis in particular have been at the cutting-edge of bicycle safety for decades. In fact, some of the bicyclist-friendly infrastructure now commonplace in many cities was introduced in Davis nearly 50 years ago. These infrastructure improvements were adopted primarily to make city streets more accessible and safer for bicyclists. Last year, California once again demonstrated its commitment to bicyclist safety by recently enacting the “Three-Foot-Law,” commonly referred to as “Give Me Three.”

What is “Give Me Three”?

The new “Give Me Three” law requires motorists to give three feet of clearance to bicyclists when the motorist is passing the bicyclist. Three feet is approximately the size of a car door. The three feet of clearance mandated by the law is designed to protect bicyclists from being clipped or struck by a motor vehicle. The law is intended to apply regardless of whether the bicyclist is riding in a designated bike lane. Motorists who are observed violating the “Give Me Three” law can be cited and required to pay a fine.

“Give Me Three”: The Focus is Safety

The overarching purpose of the 3-foot-law is to place a safe distance between bicyclists and motor vehicles when motor vehicles are overtaking a bicyclist. A motor vehicle that strikes a bicyclist from behind can send the bicyclist flying off his or her bike, causing catastrophic (or even fatal) injuries. Similarly, a motorist who pulls back in front of a bicyclist with insufficient clearance can clip the bicycle, causing injury to the rider.

“Give Me Three” Imposes Duties on Motorists

The new “Give Me Three” law imposes affirmative obligations on motorists, not on bicyclists. In other words, while a motorist must make sure that his or her actions comply with the law, bicyclists do not need to obey the three-foot-rule. For example, a car approaching a bicyclist riding in a bike lane must give three feet of clearance to the bicyclist when passing the bicyclist. If the car stops at a stoplight or stop sign and the bicyclist goes to pass the car, the bicyclist does not need to give three feet of clearance to the motorist. However, a bicyclist who fails to give sufficient clearance to a car and contributes to a bicycle crash may be precluded from seeking compensation from the motorist (or may have any monetary damages award significantly reduced).

What if My Bicycle Crash is Caused by a Motorist Who Violates the 3-Foot-Law?

A motorist who causes a bicycle crash because he or she did not follow the 3-Foot-Rule may be found to have acted negligently or carelessly. This can make the motorist liable for paying the bicyclist compensation for medical bills, lost wages, and other losses and expenses the bicyclist experiences. Proving that the motorist did not give the proper clearance may be complicated and require the use of:

How a Davis Bicycle Accident Lawyer Can Help

I’m Ed Smith, and I am a Davis bicycle accident attorney who has significant experience in helping injured bicyclists in California recover compensation for injuries they sustain in bicycle crashes. I will thoroughly investigate the reason or cause of your bicycle crash, including determining whether the motorist violated the 3-Foot-Law. Call my office, Edward A Smith Law Offices, for assistance today at (916) 921-6400.

We are members of the Million Dollar Advocates Forum, a prestigious group of trial lawyers who have won multiple million dollar verdicts and settlements.

To view our past verdicts and settlements, click here.