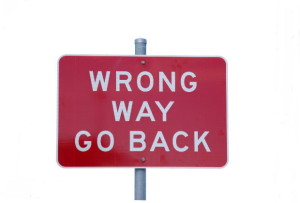 Wrong-way driving has again caused an accident in the Sacramento region.  It was only a few short months ago we wrote about a spate of the wrong-way driver causing fatal automobile accidents in the Sacramento region.  You can read that blog post here.  Now again, last night (July 30, 2015) there is another suspected incident involving a wrong-way drunk driver on Highway 99 near 47th Avenue.

Incredible luck was on the side of the intoxicated driver, who was behind the wheel of a small Toyota Prius when he slammed into a big rig that was driving in the correct direction.  According to an article in the Sacramento Bee, the drunken driver was identified as 36-year old Kevin Vanarkel of Sacramento.  According to the California Highway Patrol, Vanarkel entered the Capital City Freeway in the wrong direction shortly after 11:30 p.m. on Thursday night.  He entered the T Street off-ramp and continued south in the northbound lane until the highway converged with 99.

Interestingly, the advice previously given by the CHP to stay out of the fast lane, as drunk wrong-way drivers use that lane believing it is the slow lane, holds true yet again in this most recent incident.

Several witnesses called in a report of the wrong-way Prius on Thursday night.  A responding officer created a traffic break in an attempt to stop the drunk driver in the area of 47th avenue, but Vanarkel maneuvered around the officer’s vehicle.  He then moved his Prius toward the slow lanes and caused a head-on collision with the semi-truck at 47th Avenue.  Mr. Vanarkle sustained moderate injuries and was taken by ambulance to a nearby hospital.  The truck driver was uninjured.

For some reason, the Sacramento region appears to be a hotbed of these incidents.  It may be time to take a serious look at preventative measures such as those implemented in San Antonio, and discussed in our prior blog post on this subject.

I’m Ed Smith, a West Sacramento attorney with the most informative and comprehensive accident site on the internet, www.AutoAccident.com.  If you or someone you know has been injured in an automobile accident due to the negligence of another driver, please feel free to call me for free and friendly advice at (916) 921-6400.  If you are outside of the Sacramento region, call toll free at (800) 404-5400.