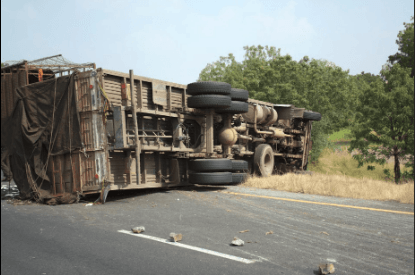 Oroville Truck Accident Damages Bridge – California Highway Patrol (CHP) officials reported that a collision took place near Oroville on Saturday, September 22, 2018. The accident occurred along State Route 162 at the Butte City Bridge to the east of Oroville. Reports stated that the crash involved a large, commercial truck that had been hauling a backhoe as its cargo. The accident left serious structural damage to the bridge, leaving it unfit for traffic. Officials from Caltrans District 3 stated that the bridge over the Sacramento River in Glenn County was set to be re-opened for vehicle use on Tuesday, September 25, 2018.

According to CHP, the accident happened at about 9:00 a.m. The semi-truck driver had been driving eastbound on SR 162 and was crossing the Butte City Bridge when he felt a sudden impact. After noticing the impact, the driver realized that his cargo had struck a trestle on the bridge. The collision between the trestle and the backhoe caused the heavy machine to fall out of the back of the semi truck and strike the bridge’s asphalt. Reportedly, the impact of the falling backhoe was strong enough to leave a two-foot hole through the bridge’s concrete, exposing asphalt and rebar. CHP stated that the Sacramento River could be seen through the exposed area.

CalTrans staff were called to the accident site where officers of CHP had shut down eastbound traffic. The westbound highway lane remained open while officers guided traffic around the hazardous area. CalTrans officials reportedly determined that the bridge was not structurally compromised by the damage and called in a Bridge repair crew in order to begin working on the exposed asphalt.

CHP stated that the bridge is an important pathway for area drivers and provides many people with an easy, direct route to Oroville from the Willows area. CHP also noted that the route is popular for local ranchers and farmers who need to transport equipment. In order to avoid the damaged bridge, drivers need to go dozens of miles out of their way to both the north and south to take either Old Ferry or Colusa Road.

When large trucks crash, there is a massive amount of force involved. Because of this, people involved in trucking accidents are often left with life-changing injuries. Trucking collisions are commonly the cause of traumatic brain injuries, internal bleeding, fractured bones, spinal damage, and more. In the worst cases, a trucking crash can easily cause multiple fatal injuries.

Most large trucks are owned by companies who are well aware of these risks and are ready to defend themselves from having to pay for any accident injuries. However, having a lawyer on your side can mean preventing these companies from disclaiming their responsibility for the crash and the sooner you have an attorney, the more effective they can be.

If you’d like to know a bit more about why trucking accidents frequently involve serious injuries, you can take a look at the video below. If you want to know about how to claim just payment from a trucking company after being injured in a crash, it’s best to contact a local personal injury lawyer.

I’m Ed Smith, an Oroville truck accident lawyer. Often, truck accidents cause major injuries. If you’ve been hurt in a crash involving a large commercial vehicle, call me at (530) 392-9400 or (800) 404-5400 for free, friendly advice. If you prefer, you can send me a message on my website.

I have more than 36 years of experience with helping Oroville residents successfully resolve their wrongful death and personal injury claims.

I’m one of Million Dollar Advocates Forum’s attorneys. This group is for lawyers who’ve helped a client obtain over one million dollars via a settlement or trial verdict.

My Verdicts and Settlements can be found here.

Read what my clients have written on: