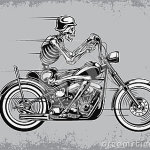 A recent article in the journal Injury Prevention provides a warning to older motorcycle riders that they are more likely (as much as three times more likely) to suffer severe injuries in a crash than younger riders.

The study separated the riders into age groups: 1) 20s and 30s, 2) 40 – 59, and 3) 60 and over.  The Brown University study revealed that injury rates for all groups were increasing, with the sharpest increase among the oldest riders.  Riders 60 and up were two and a half times more likely as a younger rider to sustain serious injuries, and three times more likely to be admitted to a hospital. The middle -aged riders were two times as likely as younger riders to be hospitalized.

The older riders suffered more severe injuries, including fractures and dislocations, injuries to internal organs and brain injuries.  Researchers at Brown opined that vision changes and a decline in reaction time could account for the older riders being more prone to accidents.  Additionally, older bodies are more fragile than younger bodies, which could explain the more serious injuries sustained by middle and older riders.

The Brown study has been argued by some.  Notably, it has been surmised that perhaps the seriousness of injuries in older motorcyclist is because they ride bigger and faster motorcycles.  The study noted that younger riders are more prone to abrasions than the older groups – perhaps because the riders in the older groups wear better protective gear.  The reaction time and vision changes opinion could be regarded as ageist – the study did not specific whether the riders in the accident were at fault for the accident.  If you or someone you know has been involved in a serious motorcycle accident and are looking for a Sacramento personal injury lawyer, please contact us at autoaccident.com