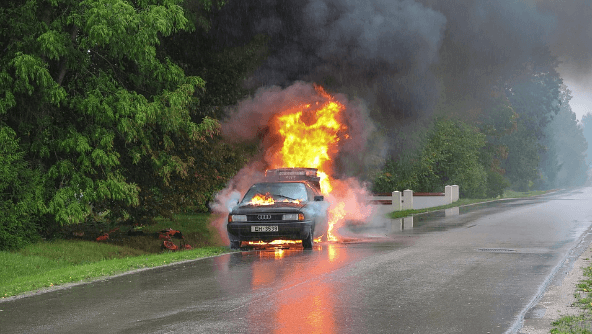 A teenager is still in recovery two days after she was pulled out of a burning car by strangers. The girl’s mother, Jacklynn Marfill, wrote a post on Facebook in hopes of finding the good samaritans who rescued her daughter and, most likely, saved her life.

One of the rescuers, Tom Lowers, said that anybody in his situation “would have done the same thing.”

Lowers told reporters that if nobody did anything, “that person was going to die.” Lowers explained that when he first approached the driver’s side of the vehicle, the fire’s heat was so extreme that he was unable to handle the door. However, the door on the vehicle’s passenger side had been locked. The rescuers say that, after discovering the locked door, they started to attempt to break through the windows.

While they were attempting to break the windows, Lowers reported that he saw the “outline of somebody” and that the outline was apparently slumped on top of the steering wheel. Lowers said that he screamed in order to get the person’s attention. After Lowers screamed, Cierra was able to push her vehicle’s unlock button. With the door unlocked, Lowers and his helpers were able to drag Cierra to safety.

Lowers said that the incident was over within the space of a few minutes. While him, Cierra, and the others waited for an ambulance to arrive, Lowers used his phone to snap photos of the burning vehicle only 20 feet away from the blaze.

Lowers is apparently no stranger to helping those in need. One of the residents of Sierra Pointe Senior Living Community where Lowers works told reporters that what Lowers did was “terrific” and added that the community has “great people.”

Additionally, it was discovered that Lowers didn’t only save Cierra from losing her life, but was also able to recover her purse from the burning vehicle. Lowers reports checking the vehicle, noticing the purse, and grabbing it out of instinct.

Marfil reports that her daughter has no memory of the accident. Additionally, Cierra reportedly received serious bruises and is suffering back pain as a result of the collision. At the time of reporting, Marfil had already spoken to other rescuers and said that she is eager to thank Lowers as well.

I’m Ed Smith, a Lincoln car accident lawyer. Car accidents frequently involve serious injuries. If you or a person you know has been in an accident and received trauma, call  (530) 392-5400, (800) 404-5400, or go to AutoAccident.com for friendly and free advice.

I have helped people from Lincoln with personal injury and wrongful death claims to receive just financial compensation for over 36 years.

See my client feedback on:

I’m a member of a U.S. forum made up of trial lawyers who’ve obtained over 1 million dollars through a single verdict or settlement –Million Dollar Advocates Forum

AutoAccident.com is my website and Northern CA’s top resource for getting traumatic injury and auto accident news and info.