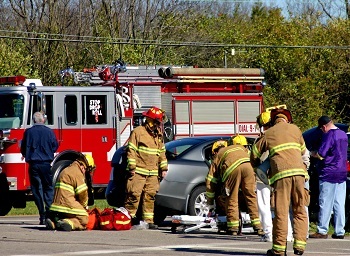 Elk Grove Major Injury Accident – An Elk Grove major injury accident occurred the afternoon of September 15 along Interstate 5, which involved three vehicles. It was reported by the California Highway Patrol (CHP) that a SigAlert was issued because traffic was blocked in both southbound lanes. Drivers who were stuck in traffic were turning around in the center divide to get onto northbound I-5 to find an alternate route. The accident will be under investigation by the CHP to determine the cause. It is unknown at this time whether drugs or alcohol contributed to the crash.

According to the CHP, the collision occurred along I-5 at the Twin Cities Road ramp bridge in Elk Grove just north of the San Joaquin County line around 4:30 in the afternoon. It involved a black BMW, white Chevy, and a silver-colored Pacifica minivan. One of the vehicles was carrying two children, who were pulled from one of the cars. The minivan ended up facing west in the number one lane, and the sedan was against the guardrail, blocking the lanes. A SigAlert was issued at 4:42 p.m. and was in effect for more than an hour before the bridge was cleared. Sac Fire and emergency medical personnel were called to the scene of the crash to attend to those who were injured. At least one individual was transported to Kaiser Permanente South Sacramento with major injuries. No information was given on others who were treated at the scene or who required hospitalization.

When traveling in a vehicle with children, there are things you need to do to keep them safe and avoid an Elk Grove major injury accident. Generally, requirements revolve around the weight and size of the child. Here are a few tips:

When Can Parents Stop Using a Safety Seat?

When the seat belt properly fits the way it should, parents no longer need to use a booster seat. Booster seats are made for older children who no longer need to use a child’s car seat but are still too small for the seat belts and shoulder restraints to fit properly. The booster raises the child in the seat, so the belts fall where they should on the child’s body. A seat belt that is ill-fitting will not save your child in an major injury accident.

I’m Ed Smith, an Elk Grove car accident lawyer. While using a well-thought-out safety protocol, accidents can still happen. In order to claim the compensation you deserve as you are trying to recuperate, you need the help of an experienced injury lawyer. Call me at (916) 694-0002 locally, or use my toll-free line at (800) 404-5400 for free and friendly advice. You can also reach me online by using my contact us page.

There is a nationwide group of top trial lawyers who have won in excess of $1 million for a client called the Million Dollar Advocates. I am proud to say I am a California member.

When an Elk Grove major injury accident occurs, you need an attorney quickly. However, it is always good to know something about them before retaining them. Learn about my practice by reviewing comments by my peers and former clients as well as see how I resolved prior cases on the following pages: