Unfortunately, dog attacks on Dog’s Owners continue everyday.  It is estimated that approximately 30% of pit bull owners have been killed by their own dog. Despite statistics that certain dog breeds are reported as being more dangerous than others, we continue to hear dog owner’s tell themselves that their family pet would never harm anyone including themselves.  We have all heard comments such as “my dog would never bite anyone” or “my dog would never hurt me”. The truth is, dog attacks do occur, even against the pet’s owners. Education is the key to protecting not only the public but also the dog owners and their family members.

Recently, in the bay area of California, it was reported that a 40 year old women was at home, when at some point, she was brutally attacked by the family pet Pit Bull.  The dog attacked her face, arms and legs causing life threatening injuries. She was life flighted to the hospital for supportive care.

Most pit bull owners swear that their pet would never attack them. Despite contrary belief, the Pit Bull has demonstrated that it is a more dangerous breed and will attack just about anyone, including their owners and children living in the family home. Oftentimes, after a tragic incident occurs, we hear “it was a freak accident” from the pet owners family members.  The graph below by the Center for Disease Control reports fatalities of pet owners continue to rise. 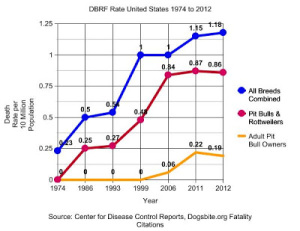 What most dog owners don’t realize is that they are responsible for the medical costs associated with any attack.   Even if the victim of the dog attack has medical insurance, the insurance doesn’t necessarily cover all of the costs.

When selecting a family pet, it is important to know about the breed  you are about to bring home. Other dog breeds that are more likely to turn on their owners as well include
the Rotweiller, German Shepherd and Doberman Pinscher to name a few.

Owners should also check with their insurer to make sure the dog breed they want to bring home will be covered.  Socializing the dog and getting proper training is also a good idea to reduce the risk of harm.

The Attorneys at the Edward A Smith Law Offices have been helping victims of dog bites for over 30 years throughout California.  If you or a loved one has been attacked by a dog, contact my office in Sacramento at (916) 921-6400 for a free consultation.  If you live out of the area, you can contact me at 1(800) 404-5400. www.autoaccident.com  See my reviews on Yelp and Avvo.